Doesn’t it make sense that if you want to start a successful career in anything, that your instructors are not just talking the talk, but actually doing what they teach?

Geoff Tucker, DVM and Melissa Buday are not just the instructors at the Horsemanship Dentistry School, they are very active in a successful practice where what they teach is used every day on nearly 4000 horses every year all over the United States. 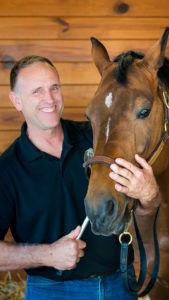 Dr Tucker started his floating career while in veterinary school at Cornell University in New York in 1983 after starting his professional career with horses in 1973. You can do the math, but at the time of this writing, he is well into his third decade of equine dentistry.

Since that day when his mentor showed him how to perform an oral exam by hand without a speculum, he has been perfecting the technique. After more than 65,000 horses, he now calls his floating style The Tucker Technique of Horsemanship Dentistry.

Dr Tucker is the founder of Horsemanship Dentistry™ – a movement that promotes the use of horsemanship not only in dentistry, but with anything done with horses. He is also the developer of and instructor at the Horsemanship Dentistry School where The Tucker Technique of Equine Dentistry is taught world wide. He has also developed several other websites to help horse owners become advocates for their horses.

Dr Tucker works today from Miami to New Orleans to Seattle to New York and Boston and everywhere in between. This is important as an instructor because students need to know that their instructors are successful in a career they are choosing. 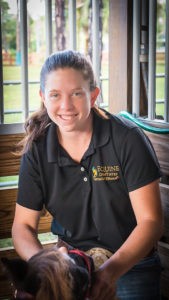 Melissa Buday got started with horses when she was 2 years old and by high school, was known as the one to call to ride any horse in town. For a short time after college, she worked outside of horses but was soon drawn back in when she found out that Dr Tucker was looking for someone to join his practice.

She tried out for the position in 2009 and has been with The Equine Practice, Inc since then floating almost 13,000 horses in the first 8 years.

Melissa’s natural talent with horses is now coupled with dentistry making her not only the top Horsemanship Dentist in the country, but has placed her as the lead instructor at the Horsemanship Dentistry School where the students love her gentile and patient teaching style.

She now does most of the Horsemanship Dentistry in Florida and South Carolina and often travels with Dr Tucker to work in other states when he needs an extra hand getting the volume of work done.

Most horse owners are now calling Melissa their primary equine dentist and it is this acceptance that makes her not only a great technician to learn from, but a great mentor to learn the fine art of working with the horse’s owner.